THE POWER OF INTERCESSORY PRAYERS 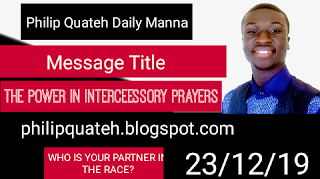 THE POWER OF INTERCESSORY PRAYERS

This is one of the most important prayers that believers need to pray.

INTERCEESORY prayers is a kind of prayer, where one believer pray for the other.

It is very important  that as we Christians we will pray for each other. There are many people who died before their time because they got know one to interceede for them when they were weak or in times of trouble/temptation.

Ecclesiastes 4:7-12
[7]Then I returned, and I saw vanity under the sun.
[8]There is one alone, and there is not a second; yea, he hath neither child nor brother: yet is there no end of all his labour; neither is his eye satisfied with riches; neither saith he, For whom do I labour, and bereave my soul of good? This is also vanity, yea, it is a sore travail.
[9]Two are better than one; because they have a good reward for their labour.
[10]For if they fall, the one will lift up his fellow: but woe to him that is alone when he falleth; for he hath not another to help him up.
[11]Again, if two lie together, then they have heat: but how can one be warm alone?
[12]And if one prevail against him, two shall withstand him; and a threefold cord is not quickly broken.

We have to be one and love each other  .
Paul requested for prayers from the believers that God will give them more grace and also they will escape from the plottings of the evil one.

2 Thessalonians 3:1-2
[1]Finally, brethren, pray for us, that the word of the Lord may have free course, and be glorified, even as it is with you:
[2]And that we may be delivered from unreasonable and wicked men: for all men have not faith.

Even God’s Spirit interceede for us when we pray.
Romans 8:26-27
[26]Likewise the Spirit also helpeth our infirmities: for we know not what we should pray for as we ought: but the Spirit itself maketh intercession for us with groanings which cannot be uttered.
[27]And he that searcheth the hearts knoweth what is the mind of the Spirit, because he maketh intercession for the saints according to the will of God.

Beloved, to pray for others is very important.

People who where interceded for when they entered into problems/persecutions we are saved by God’s grace.

Herod the opposer of the preachers of the Gospel and disciples of Jesus Christ was killing some of the disciples with the intension to stop the propagation of the Gospel.

But Bible says “the people prayed for Peter without ceasing”

Acts 12:5-11
[5]Peter therefore was kept in prison: but prayer was made without ceasing of the church unto God for him.
[6]And when Herod would have brought him forth, the same night Peter was sleeping between two soldiers, bound with two chains: and the keepers before the door kept the prison.
[7]And, behold, the angel of the Lord came upon him, and a light shined in the prison: and he smote Peter on the side, and raised him up, saying, Arise up quickly. And his chains fell off from his hands.
[8]And the angel said unto him, Gird thyself, and bind on thy sandals. And so he did. And he saith unto him, Cast thy garment about thee, and follow me.
[9]And he went out, and followed him; and wist not that it was true which was done by the angel; but thought he saw a vision.
[10]When they were past the first and the second ward, they came unto the iron gate that leadeth unto the city; which opened to them of his own accord: and they went out, and passed on through one street; and forthwith the angel departed from him.
[11]And when Peter was come to himself, he said, Now I know of a surety, that the Lord hath sent his angel, and hath delivered me out of the hand of Herod, and from all the expectation of the people of the Jews.

Beloved, it is important to pray for others without ceasing that God will save them.

Now Peter did not died before his time but was delivered from the snare of the Fowler and from the noisome pestilence.

THE PERSECUTION OF JOHN THE BAPTIST WITHOUT
BEING INTERCEEDED FOR

John the Baptist died without being INTERCEEDED for.

Matthew 14:7-12
[7]Whereupon he promised with an oath to give her whatsoever she would ask.
[8]And she, being before instructed of her mother, said, Give me here John Baptist’s head in a charger.
[9]And the king was sorry: nevertheless for the oath’s sake, and them which sat with him at meat, he commanded it to be given her.
[10]And he sent, and beheaded John in the prison.
[11]And his head was brought in a charger, and given to the damsel: and she brought it to her mother.
[12]And his disciples came, and took up the body, and buried it, and went and told Jesus.

Beloved before this, John was already in prison and had loosed hope and non of his disciples prayed for him.

Matthew 11:2-3
[2]Now when John had heard in the prison the works of Christ, he sent two of his disciples,
[3]And said unto him, Art thou he that should come, or do we look for another?

When prayer is made by the righteous or by the believers, God hears them and heaven is open by force.

Beloved pray for others and let them get liberty even those who hate you, you have to pray for them that they will not loose hope.

Pray without ceasing and also pray for there is power in the prayers of the saint or the righteous.

James 5:16-18
[16]Confess your faults one to another, and pray one for another, that ye may be healed. The effectual fervent prayer of a righteous man availeth much.
[17]Elias was a man subject to like passions as we are, and he prayed earnestly that it might not rain: and it rained not on the earth by the space of three years and six months.
[18]And he prayed again, and the heaven gave rain, and the earth brought forth her fruit.

There is power in the name of Jesus Christ, to break every chain and yokes.

You are each other partner and never fail your partner, even those who are weak, bring them to Christ and lead them in prayers.

Beloved prayer for others and even your enemies that they will survive and know the truth of God.

THE LORD’S PRAYER: THY KINGDOM COME

HOUR OF RESTORATIONFRIDAY, SEPTEMBER 18, 2020THE LORD'S PRAYER: THY KINGDOM COMEBasic Scripture: Matthew 6:10-11Thy Kingdom come, Thy will be done in earth as it...
Read more
Daily Prayers

WORD AND PRAYERS: Do Not Joke With Prayers Else Your Request And Promises Will Always Be On Pending

Daniel 10:12-13Then said he unto me, Fear not, Daniel: for from the first day that thou didst set thine heart to understand, and to...
Read more
Daily Prayers

Blessings From Philip Quateh To All Readers Of The Gospel Online Tracts.

I love you all beloveds from all over the globe who reads the gospel online tracts.I am so much excited that you read the...
Read more

Do You Want Your Sins Forgiven?

Do You Want Your Sins Forgiven?Jesus Christ was sent by God to save us from our sins. He came to purposly save us and take...
Read more

The Works Of The Holy Spirit

The Works Of The Holy SpiritThe Holy Spirit is a personality without body. He is the third person of God the Trinity. As Jesus Christ...
Read more

Characteristics Of True Love In Marriage – By Philip Quateh

Do You Want Your Sins Forgiven?

Do You Want Your Sins Forgiven?Jesus Christ was sent by God to save us from our sins. He came to purposly save us and take...
Read more

The Works Of The Holy Spirit

The Works Of The Holy SpiritThe Holy Spirit is a personality without body. He is the third person of God the Trinity. As Jesus Christ...
Read more

To be Captive means to be a slave.  These are the people taken by force as prisoners by their enemies in war. Beloved, sin takes...
Read more

Blessings From Philip Quateh To All Readers Of The Gospel Online Tracts.

I love you all beloveds from all over the globe who reads the gospel online tracts.I am so much excited that you read the...
Read more

FSS is your number one stop for christian articles read.